The language of interfaith conversation

The journey into interfaith conversation is not unlike a journey around the world. Instantly we are connected with diverse cultures, customs and concepts. Just as when visiting distant lands we may pick up a phrase book to learn how to facilitate basic communication, a simple phrase book for interfaith conversation may be helpful. The following is not so much a Glossary of Interfaith Words but rather possible chapter headings if such a book actually existed. 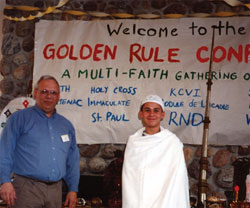 J.W. Windland stands beside a young man in clothing worn by men during the Muslim Hajj (pilgrimage to Mecca). JW is a resource person for the Scarboro Interfaith Desk assisting with several interfaith events.

One parlance of interfaith language is Mindful Vocabulary. A church is not a synagogue. A synagogue is not a masjid (mosque). A masjid is not a gurdwara (Sikh house of worship). Using the correct term indicates that you have taken the time to become at least basically aware of the conversation partner's faith tradition. But interfaith language can be very confusing. Perhaps instead of faith-specific terms, faith-neutral terms may serve better. For example, "house of worship" is a term that fits most traditions and communicates what you intend to say without calling an apple an orange. Because some traditions such as Native spirituality or Baha'i do not necessarily have a traditional "house" of worship, the term "place of worship" may be even more suitable. Developing a type of informal, all-purpose Interfaith Glossary is a helpful exercise that heightens an awareness of the words we use and dissolves the presumption that "everyone is just like me."

A second suggestion for interfaith conversation is the language of Mindful Respect. Learning simple greetings is an expression of respect and honour for another's tradition and culture. Examples include Namaste (Hinduism), Shalom (Judaism), Asalaam Alaikum (Islam), Sat Sri Akaal (Sikhism). You'll find diverse greetings interesting to learn and fun to use. Mindful respect in interfaith conversation is not only about what you might want to say but also what you might not want to say. Avoiding offensive or judgmental terms requires the language of mindful respect. Instead of referring to a particular ritual or event as "strange" or "weird," use terms like "unfamiliar to me" or " different than I have seen before." Using the language of mindful respect communicates a sense of dignity and worth toward the dialogue partner.

A third suggestion for interfaith conversation is Mindful Use of Insider/Outsider Language. Every faith tradition has its own lexicon. Sikhs know well what is meant by kangha, Muslims know wudu, Buddhists know tanha, Jews know aliyah. However, each faith tradition may be unfamiliar with the language of the others. In order to be understood in interfaith conversations, it helps to be mindful that you are speaking to an "outsider" who may not know your faith's vocabulary. Using straightforward outsider definitions: "small wooden comb" (kangha), "ritual washing" (wudu), "selfish craving" (tanha), "going up to read the Torah" (aliyah) insures that you will more likely understand as well as be understood.

A fourth suggestion for interfaith language is Mindful Gentle Commitment. Interfaith conversation does not mean hiding or temporizing one's own strongly held beliefs. Indeed the best interfaith conversation is between faithful commitments. It is often through the shared commitments of dialogue partners that beliefs are mutually enhanced and enriched. Such sharing can be done – indeed, must be done – in the language of gentleness that is not exclusive, arrogant or patronizing. When a Jew proclaims that the messiah has not yet come, a Christian will disagree; when a Christian proclaims that Jesus is the Christ, a Muslim will disagree; when a Muslim proclaims that Mohammed is the seal of the prophets, a Mormon will disagree; and on and on.

Interfaith language, like any other language, includes both speaking and understanding. A more mindful language is just one of many tools to make this possible. As you engage in interfaith conversation you will no doubt think of many other chapter headings for a phrase book of mindful interfaith language. Such language expresses our common humanity, promotes civility and builds relationships of mutual respect and trust. Such language pursues peace.