What the Second Vatican Council, whose 50th Anniversary of its opening session we are celebrating this year, had meant and does mean for me is clearly highlighted in the first sentence of the central document of the Council, Gaudium et Spes (The Church in the Modern World):

Surely this is the most quoted sentence from the thousands of words that came from the four sessions of the Council. And rightly so! 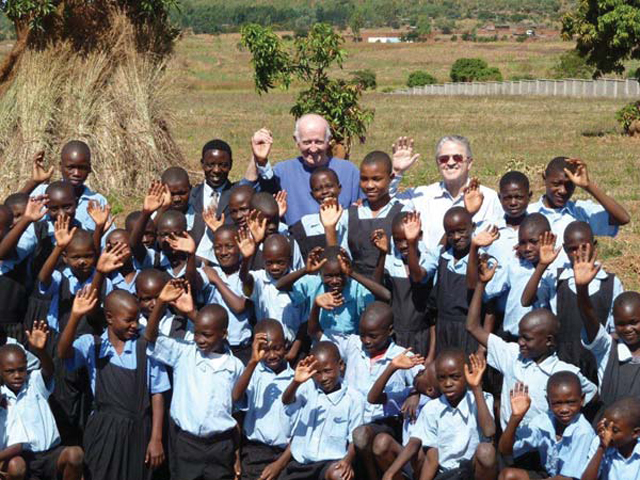 I was a young Jesuit seminarian during those heady days of the Council, coming from traditional philosophical studies in a Catholic university to doctoral studies in political science at the very secular University of Chicago. These were the days of my engaging in the civil rights movement led by Martin Luther King Jr., being involved with the beginning of demonstrations against the Vietnam War, and living out of the shock of the assassination of our President.

What that Gaudium et Spes statement did for me—and continues to do during my many years here in Africa—is marked in the vocation of my Church and in my vocation within that Church. The statement made very clear that the Church’s mission is necessarily involved in the unfolding history of our times, especially in our involvement with the challenges to the poor. This is what another great document of the church’s social teaching stated a few years later: “The hopes and forces which are moving the world in its very foundations are not foreign to the dynamism of the Gospel, which through the power of the Holy Spirit frees people from personal sin and from its consequences in social life.” (Justice in the World, 1971, #5)

Put simply, the salvation wrought by the life, death and resurrection of Jesus has earthly consequences, not simply heavenly assurances. Thus to follow Jesus Christ authentically it is necessary to become involved in the socio-economic, political and cultural changes (revolutions) of the contemporary world.

...the Church’s mission is necessarily involved in the unfolding history of our times, especially in our involvement with the challenges to the poor.

The Gaudium et Spes phrase, “especially of the poor,” would have practical consequences in the formulation and implementation of the Church’s vocation. This developed later—largely through the influence of Latin American liberation theology—with the “preferential option for the poor.” As subsequently developed by Pope John Paul II in Sollicitudo Rei Socialis (1987, #42), this option means that the Church’s vocation to serve the Reign of God requires evaluating the social scene with the eyes of the least advantaged in society and putting an emphasis in pastoral work and political advocacy on the needs of these least advantaged.

This emphasis, was, of course, institutionalized shortly after the close of the Council in the creation of the justice and peace commissions at the level of the Vatican curia, national and diocesan offices and local parish committees.

The Church’s vocation expressed in Gaudium et Spes was further clarified in the great Catholic social teaching documents such as Paul VI’s Populorum Progressio on development (1967); the Synod of Bishops’ Justice in the World (1971); John Paul II’s Centesimus Annus (1991) on the collapse of Marxist rule; the two meetings of the African Synod of Bishops (1994 and 2009) on reconciliation, justice and peace; and Benedict XVI’s Caritas in Veritate on the link between love and justice.

My vocation within our Church

What did the clarion call of Vatican II’s Gaudium et Spes mean to me and my vocation as a Jesuit priest in our Church? Certainly it influenced my involvement in key justice and peace apostolates in Washington, DC

In a singular way, my vocation was—and still is—shaped by the impact that Vatican II’s Gaudium et Spes had on the Jesuit Order of which I am a member. The saintly Father General who led us Jesuits during the years following the Council, Fr. Pedro Arrupe, was particularly strong in insisting that justice and the concern for the poor should mark all our education, pastoral, spiritual and social apostolates. This was to be true both in older countries and in newer mission lands. His successors, Fr. Peter-Hans Kolvenbach and Fr. Adolfo Nicolas, have urgently continued this clear emphasis.

In a singular way, my vocation was—and still is—shaped by the impact that Vatican II’s Gaudium et Spes had on the Jesuit Order of which I am a member.

And in a general gathering of Jesuits a few years after the Council, the vocation spelled out in Gaudium et Spes was incarnated in our mission as it was expressed as “the service of faith and the promotion of justice.” These two dimensions were always to be together, never one without the other. The theology and spirituality which grounded the vocation of the Church became the theology and spirituality which supported my vocation as a Jesuit.

As we celebrate the 50th anniversary of the opening of Vatican II, there might be signs of distraction from the Church’s vocation expressed in Gaudium et Spes. A return to more centralized modes of governance, manifestations of hyper-clericalism in some circles, and the disruption of mission by scandals of sexual abuse have all taken their toll on my Church.

But in my own experience of vocation in this Church of saints and sinners, I have continued to experience a vocation to be responsive to the “joys and hopes, the sorrows and anxieties, of the women and men of this age, especially the poor and those afflicted in any way…” Truly these are the ways of identifying with Jesus Christ in the establishment of God’s Reign. I am profoundly grateful for the vocation graces of the Second Vatican Council.

After 21 years as the director of the Jesuit Centre for Theological Reflection in Lusaka, Zambia, Fr. Peter Henriot, S.J., is currently in Malawi working to establish a Jesuit Secondary School in Kasungu.
Email: phenriot@jesuits.org.zm

Vatican II’s The Church in the Modern World (Gaudium et Spes) calls the Church to be involved with the issues of our times and the concerns of the poor. This was further clarified in Pope Paul VI’s 1967 encyclical, Populorum Progressio (On the Development of Peoples), which took a stronger stand on social issues than any previous encyclical and led the Canadian bishops to establish the Canadian Catholic Organization for Development and Peace in 1967.